The changing properties of wastewater and other fluids can cause unexpected pump performance.

Thixotrophic fluids get thicker when sitting but thin over time when stressed. A single sharp impact does not appreciably reduce a thixotropic fluid’s viscosity. However, continuous shearing for a few seconds or minutes usually thins the liquid. Examples of thixotropic fluids include many wastewater sludges, drilling fluids, paints, flocculants, bentonite mixtures, honey, molasses and ketchup. Almost all thixotrophic fluids are also shear-thinning, meaning the force and the length of shear time reduces the fluid’s viscosity.

Rheopectic fluids do just the opposite. They get thinner when sitting and thicker when stressed over time. Printing ink is one example, but rheopectic fluids are fairly rare.

Pseudoplastic, or shear-thinning, fluids’ viscosities decrease with the force of stress. Most shear-thinning fluids are also thixotropic. Ketchup is a good example of this type of fluid. When trying to get ketchup out of a glass bottle, usually the bottle has to be turned upside down and shaken or hit. A combination of sufficient force over sufficient time is required to reduce the ketchup’s viscosity enough for it to flow.

Dilatant, or shear-thickening, fluids’ viscosities increase with the force of stress rather than the length of time of stress. A familiar example is the silicone-polymer toy Silly Putty, which is very soft in the hand but becomes hard when thrown down. Most dilatant fluids are also rheopectic. For example, turning cream into whipped cream takes the right combination of time and force.

Implications for Pump and Pipe Sizing

To do a good job of sizing pumps, motors and piping to meet performance specifications, operators need to know the minimum and maximum viscosity of fluids to be pumped. Viscosity can significantly affect pump suction requirements, discharge pressure required and pump performance.

Viscosity-induced friction losses in discharge pipe can be considerable. For example, the pounds per square inch (psi) loss per 100 feet when pumping 50 gallons per minute (gpm) of fluid with a specific gravity of 1 through new, schedule 40, 2-inch steel pipe is shown in Table 1.

This is in addition to the velocity friction loss commonly included in hydraulic calculations based on water. While knowing highest viscosity is critical, knowing lowest viscosity is also important, because this may result in more slip and lower pump output. Pump suppliers should be able to provide accurate estimates of pump output at minimum and maximum viscosity. Determining the viscosity of a non-Newtonian fluid can be challenging because the effects of time, force and temperature on viscosity must be understood.

A good example of a practical way to model friction losses for wastewater sludge is shown in Figure 1, taken from the Environmental Protection Agency’s (EPA) Standard 625/1-79-011. The thicker a particular type of wastewater sludge is, the greater its viscosity. 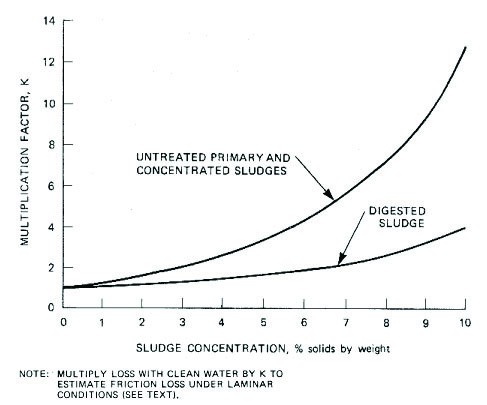 Figure 1 shows, for instance, that pipe friction loss when pumping 5 percent untreated municipal sludge will be approximately four times as much as when water is pumped. If several sets of discharge pipe that are 100 feet long are specified, larger pipe may be required to obtain the lowest long-term cost. The EPA guidelines can be used as a rough estimate provided pipe velocities are between 2.5 and 8 feet per second and the pipe is not seriously obstructed by grease or other materials. Pumping wastewater sludge at low velocities in a pipe may require more horsepower than pumping at higher velocities. This is counter-intuitive but results from solids dropping out of suspension and gradually reducing pipe size.

The EPA guideline for pumping wastewater sludge also does not consider thixotropic behavior. As a result, when starting a pipeline shutdown for more than one day, higher pressures may be required than would be calculated using the graph. Friction losses may be much higher in suction pipe. Care must be taken when pumping shear-thinning, thixotropic fluids that the suction piping is designed to allow fluid to continue to feed into the pump after a weekend shutdown in cold weather. A special problem of wastewater sludge is that, unlike water, it compresses under pressure. A static shear stress test can be obtained to accurately determine the force required to overcome initial resistance to flow for thixotropic fluids.

A research team in Canada developed another approach to obtaining a reasonably accurate model. They did a series of empirical studies at wastewater treatment plants. Based on these results, they proposed adjusting the Hazen-Williams pipe coefficient as a simplified way of including thixotropic resistance in the required hydraulic calculations (see Table 2).

Guidelines for Other Non-Newtonian Fluids.

Practical guidelines are available for most non-Newtonian fluids. Most of these fluids thin as a result of force, time and temperature. Most experienced users have developed successful guidelines for pumping their fluids. However, if the user is experiencing difficulties, these cannot be resolved economically without knowing minimum and maximum viscosities and what causes them.

All fluids become less viscous as a result of heat. Most non-Newtonian fluids thin both as a result of the amount of force and the length of time the force is applied. To accurately model pump performance, the minimum and maximum viscosity of the fluid to be pumped must be known. The viscosity range of non-Newtonian fluids can be wide and have significant effects on pump performance and pipe sizing.

PrevLobePro Rotary Pumps – What We Can Offer You…..
Before and AfterNext
This website, based in the United States, uses "cookies" to enhance your browsing experience and to allow us to improve our website usefulness to you and to us. Learn more about cookies and how to change your consents and preferences in our Privacy Policy.
Accept
Decline